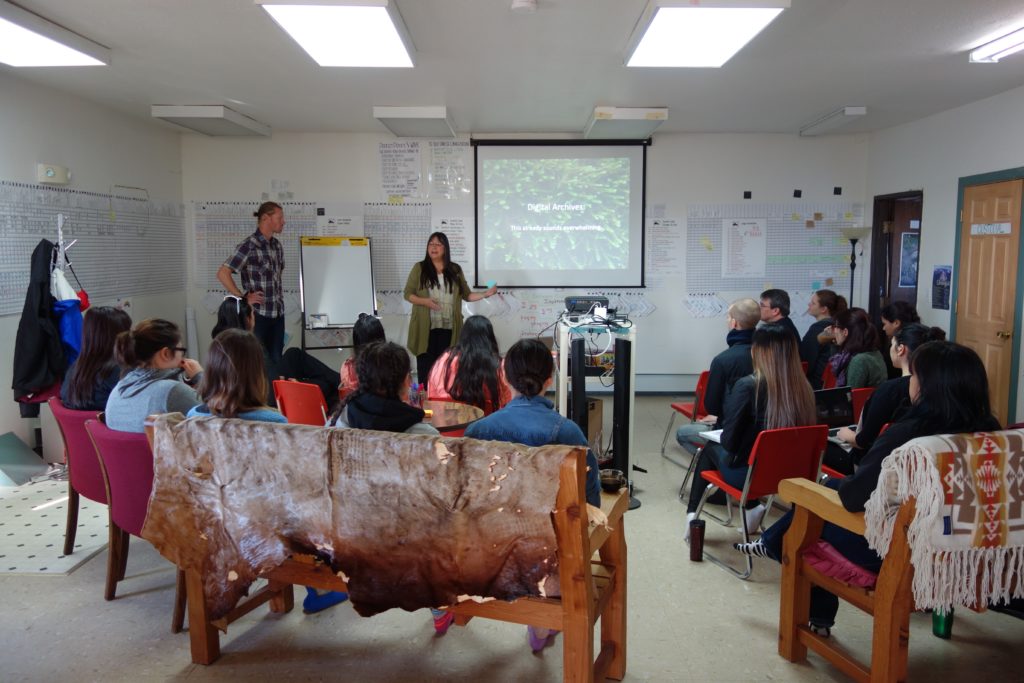 “It’s got to be here somewhere. It just has to be,” I say to no one in particular. “Where did I put it? I swear someone must have moved it.” If you’ve ever worked on project with a lot of moving pieces or are simply a mere human such as myself, you know the feeling. Whether you’re looking for your keys, your phone or notes from your latest hunt of Unangam Tunuu, if you can’t find it, it doesn’t exist. If it’s not easily accessible to those that need it, want it, gotta have it, it doesn’t exist.

Over a successful Week 2 of the 2017 Summer Language Intensive, we participated in an archive creation workshop, wherein we attempted to solve the age-old problem of, “I know I have it, I just don’t know where it is,” with regard to the UTSLT team’s growing collection of Unangam Tunuu materials (e.g. audio recordings, lesson plans, historical records etc.). The answer, as we discovered, was an intuitive, easily-accessible and super supremely well-organized…wait for it…catalog of available resources. *Cue celestial music, skies parting and doves flying.*

Secret sauce in hand and the UTSLT team at the helm, we attempted our first catalog—only to find out that it isn’t as easy as one (a.k.a. me) would have thought. In my humble experience with language documentation, small language communities can sometimes struggle with archiving, especially when teams are tiny or have high turnover, resources are tight and little is known about the great, but also overwhelming, world of archives. Anything can pose problems from selecting what information to include, to finding time to process objects, to accurately representing materials and community interests. Obstacles aside, keeping these materials organized and accessible is key to language learning and cultural history, to individuals (who may have a relative in the files) as well as the community at large.

So, to archive, or not to archive, as it turns out, is not the question—it’s a definite must. The question is how. How do we use the tools and talents of our team to create the most effective archive possible with minimal time, effort and resources? Now, I don’t pretend to know all the answers, but what I can give you are my top three takeaways from our training this past week:

1. Do it yourself and do it often.

When it comes to archiving, heed the words of Nike and Shia LaBeouf, and just do it. “I’ll do it later” won’t cut, as tempting as it may seem. If you’re at all involved with the item (e.g. creator, contributor etc.) record the information yourself as you go along. No one knows the material better than you and entering it soon after creation will ensure that it’s still fresh in your mind. You’ll save your team a ton of time and effort in the long run. Let’s save those pennies, people!

2. Be accessible, be reciprocal.

“One small archive for (a) man. One giant archive for mankind.” No? That’s not how that one goes? Okay. Well, the point is, keep in mind that archiving isn’t only about your project, but also about your immediate and greater community. Archiving should be a service-oriented, collaborative venture that’s both highly accessible and reciprocal. To make it fully accessible to language learners, community members and researchers alike, make the catalog easily searchable, conduct outreach and spread awareness, among other possibilities. In the spirit of reciprocity, share your resources with community members and partner organizations and be open to accepting the materials and feedback you might receive in return. If the archive contains materials belonging to a particular group or people, tailor your accessibility and reciprocity efforts to them, being sure that consent was given, deferring to them to determine how the materials should be portrayed and cared for, and informing them if a relative was somehow included.

Take time to get to know your tools and your team. I’ve been working with Excel for years and we learned simple data manipulations in our workshops that left my jaw on floor (#nerdalert). Spending time to really get to know your software and the skills/expertise of your team will save oceans of time. Look out for those special tricks and understand who is good at/likes to input information and ask them to take the lead. As to avoid a single point of failure and any bottlenecking that may occur, encourage that leader to train other team members in their ways.