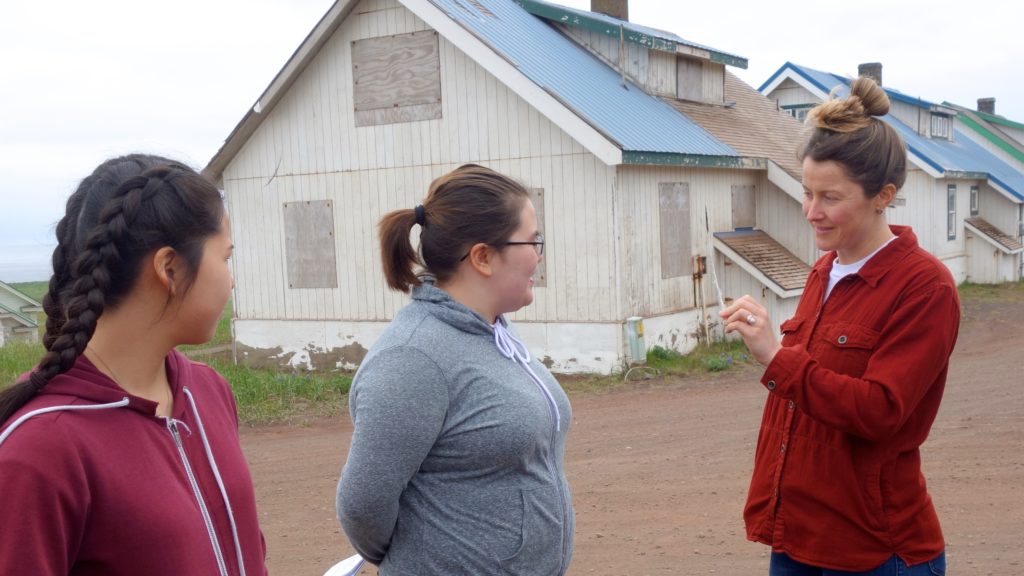 At the beginning of the summer language intensive, Susanna and Evan introduced us to the Circle of Questions, a concept used in TPRS (Teaching Proficiency through Reading and Storytelling; read more in Fluency Through TPR Storytelling). I find it an incredibly useful tool for learning and teaching. Below is a description of the concept with some examples, and my thoughts on why it’s useful and how you might use it at a tool yourself as a learner or educator.

The Circle of Questions is a series of questions that “circle” around a piece of information, potentially leading to a new piece of information. If you follow the series in order, the result might be a silly-sounding conversation, just because the series is more formulaic and repetitive than an authentic interaction, especially if you are being true to Technique: Full Sentences by answering in full sentences.

Below is a dialogue that I had with local team member Aquilina, when we were practicing using the Circle of Questions in our first language of English.

Mary: [Pointing to a dark colored, porous rock] What is that?

Aquilina: That is a lava rock.

Mary: Is that a lava rock?

Aquilina: Yes, that is a lava rock.

Mary: Is that a lava rock or a… sand rock?

Aquilina: That is a lava rock.

Mary: Is that a sand rock?

Aquilina. No, that is not a sand rock. That is a lava rock.

Mary: Where did you get that lava rock?

Aquilina. I got this lava reach at the beach over there.

If you look at the diagram, you can see us go around the circle starting with the very basic question, “What is that?” and a very basic piece of information, “That is a lava rock.” Instead of moving on to another object or more information about the lava rock, I “circle” the basic piece. I ask a question to be answered with “Yes.” Then an either/or question. Then a question that demands a “No.” Finally, I ask a new where/when/what/who/why question, which adds some new information. This means I could begin the journey around the circle again, but with new vocabulary and in a different tense (“Did you get that lava rock at the beach over there?”). 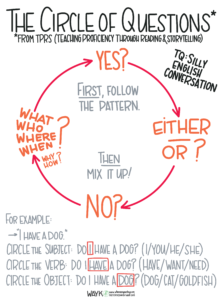 As you can see in the sample, the dialogue looks silly and maybe even pointless. This kind of conversation, though, is incredibly useful for a language learner! The main benefit I see is that it helps the learner manage the tendency to race ahead with a native or fluent speaker, asking for more and more new stuff, without understanding or being able to use the new pieces very comfortably. The Circle of Questions forces both people to slow down. It forces the learner to take time to test the language in different constructions.

I have been hunting Dutch with Myles, and I noticed that I was starting to run ahead (“his/her” “pregnant” “Forget Me Not” “similar” “I want to be funny”), in an eagerness to express new things, even if I forgot them a minute later. I asked if we could try using the circle more. On a walk to class, Myles humored me, and it made me feel way more confident as I was learning. Here’s the conversation, which you can probably follow.

At this point Myles could have gone in a new direction, like “Where are you from in Canada?” but instead he invited me to ask him the questions. This was a great chance to practice on the other side. Now when we are speaking Dutch together, I will sometimes pause us and draw a circle in the air, to say, “Let’s go through the series.”

Obviously you don’t want to circle every new idea that pops up – that would take forever and bore everyone involved. Save the tool for new pieces of language that you want to test, or moments when you need to slow things down. To introduce it to others, be sure to model it and have people practice in their first language. I would also suggest checking in and asking learners if they are using it, how, and what benefits they find. To keep it in mind, make a poster based on the diagram, and put it up in your classroom.

Enjoy going around in circles – albeit in a very productive way!