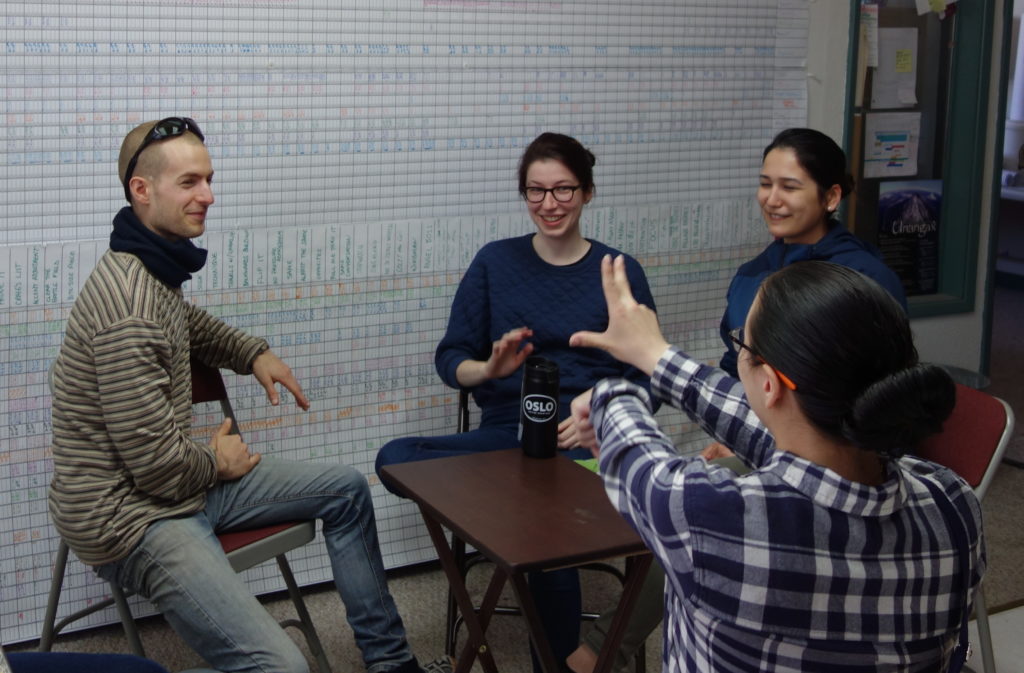 Early on in teaching TQs (Techniques), Evan pointed out that an ASL (American Sign Language) sign can be used in at least two ways in WAYK. For example, the sign translatable as ‘again’ can be used as in the sentence ‘then the shark nibbled me on the finger again’. Or it can be used as a suggestion, request, or command, translatable into English as ‘please say that again’ or ‘do you want to do that again?’ (the difference between these two possible translations would be signaled by facial expression in ASL).

Before long I realized that WAYK signs were being used with quite a few different “kinds of meaning”, and I was trying to work out on the spot which kind someone meant when they signed to me (I use the word sign even if WAYK signs are not used in the same way as in ASL, because they are fully conventionalized, in contrast to gestures; see e.g. Seyfeddinipur & Gullberg 2014).1 I also realized that I had read about these different kinds of meaning in linguistics articles and books, particularly in theories of speech acts and conversational logic. One of my favorite writers on this topic, Anna Wierzbicka, writes:

“Common sense suggests that human life consists, to a very large extent, of a variety of speech acts. From morning to night, people ask, answer, quarrel, argue, promise, boast, scold, complain, nag, praise, thank, confide, reproach, hint – and so on and so on. Moreover, from morning to night, they seek to interpret (consciously or subconsciously) what other people are doing when they speak, that is, what kinds of speech acts they are performing. Virtually every time someone opens his or her mouth in our presence we need to interpret their utterance as this or that kind of speech act. Was it a threat? Or just a warning? Was this a suggestion or a request? Was this a criticism or just a casual remark? Was this a hint?” (Wierzbicka 1991:197)2

So I wondered if any of these theories could help me figure out what different of kinds of meaning are thrown about in a WAYK hunt. Maybe figuring that out could in some way help other people learn TQs too.

Most academics writing about this subject distinguish at least between the two basic kinds of sign that I mentioned in my first paragraph. The first kind covers meanings like ‘that’s a rock’, ‘I’m cutting up kangaroo meat’, ‘my head is exploding’, and so on. Erin has already written a great blog post about this kind so I won’t say more about it. 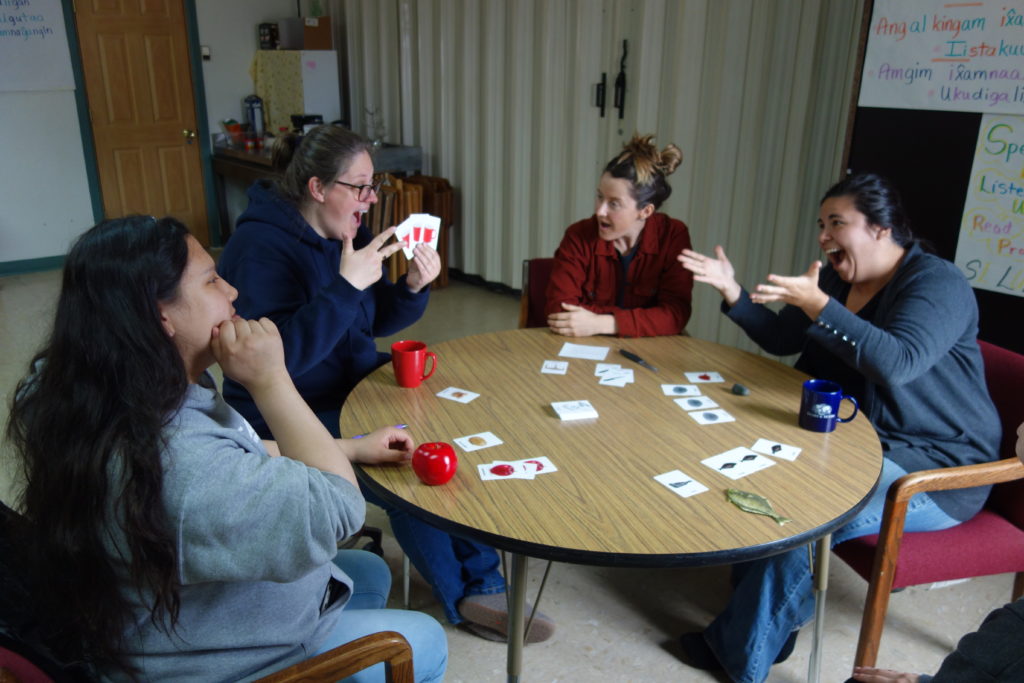 The second kind of sign is used to say something about the communication taking place in the moment. I’ll call these signs metalinguistic comments, since that seems to be a fairly well-accepted term in linguistics. For example, if the teacher (or more fluent speaker) is teaching how to ask the question ‘how are you?’, they can sign ‘copycat me’ to tell the learners to copy them rather than answering the question. If instead they want learners to actually answer the question, they can sign ‘cat’s out of the bag’. Being able to make this distinction quickly and unambiguously is crucial in immersion language learning, in order to avoid confusion, stress, and wasted time. Another example could be when a learner is saying something just to practice pronouncing it; there isn’t a WAYK sign for this, although I would like one, in order to clarify to everyone else that they can ignore what I’m saying (cf. Dore 1975 on practicing as a distinct speech act).3 To explain this second kind of sign another way, they could all be paraphrased as ‘what I’m doing now is asking a question/modeling pronunciation/practicing/etc.’ (cf. Wierzbicka 1991). It’s interesting to note that in WAYK, as in most natural languages (English, Chinuk, ASL, etc.), utterances such as ‘there’s a fire next door’ are unmarked; there is no TQ to clarify that, rather than just giving you a pronunciation drill, I really want to tell you there is a fire next door! Luckily humans usually find a way to communicate that kind of urgent information soon enough. 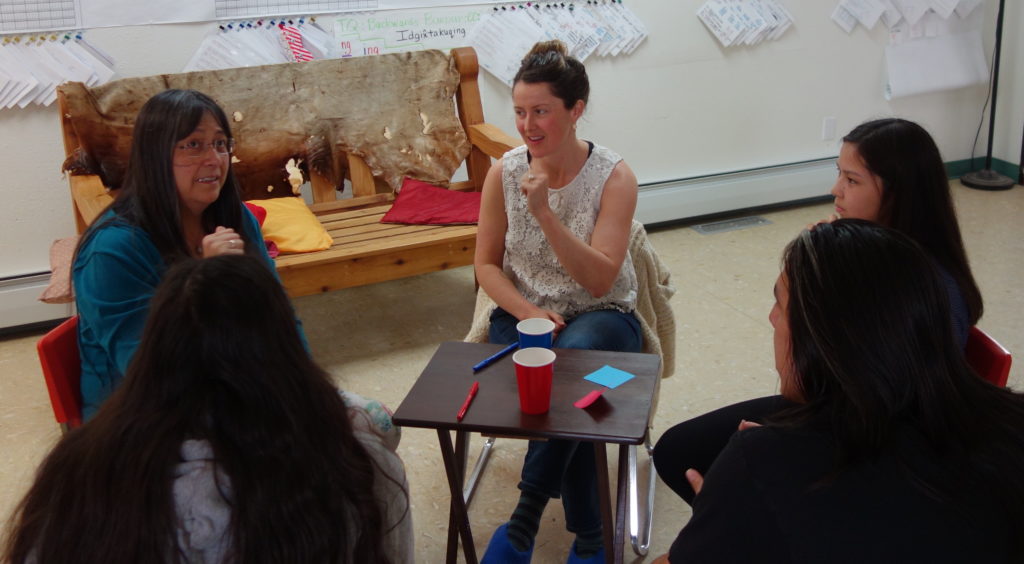 I find this second kind of sign particularly interesting (although the first kind is just as valuable as a memory aid and immersion-prolonging device, as Erin explains). That’s because using your hands allows you to make a metalinguistic comment on what you’re saying at the same time as you say it. By contrast, if you have to do everything with your voicebox, then (a) you use up valuable language-learning time, (b) there can be confusion about when you’re making a metalinguistic comment versus “actually” saying something, and (c) you have to decide whether to make the metalinguistic comment before or after, which can also lead to confusion.

There are many other factors to think about in categorizing TQs, which will have to wait for another blog. One is whether a metacomment is about oneself, or “targets other interaction participants, whose actions it is intended to regulate” (Streeck 2009:10) 4; another is whether it is thrown by the learner or thrown by the teacher. These are just a few distinctions relevant to language learning that I happen to have thought of in the last week (so any feedback on gaping holes is welcome). I’m also aware that I haven’t discussed TQs that seem to me more like general pieces of advice for language learning/teaching, and which are not linked to a particular sign, such as ‘50/50’ or ‘a few of my favorite things’.

To close, TQs based on ASL are also a particularly conspicuous aspect of the WAYK method as a whole, and one of the first questions people ask when people see WAYK is probably “what does that mean?”. So an additional benefit to thinking about the different kinds of TQs might be to help people understand what WAYK is about; and, more specifically, how it streamlines communication with the goal of speeding up language learning.

Austin, John. 1962. How to do things with words. Cambridge, MA: Harvard University Press.