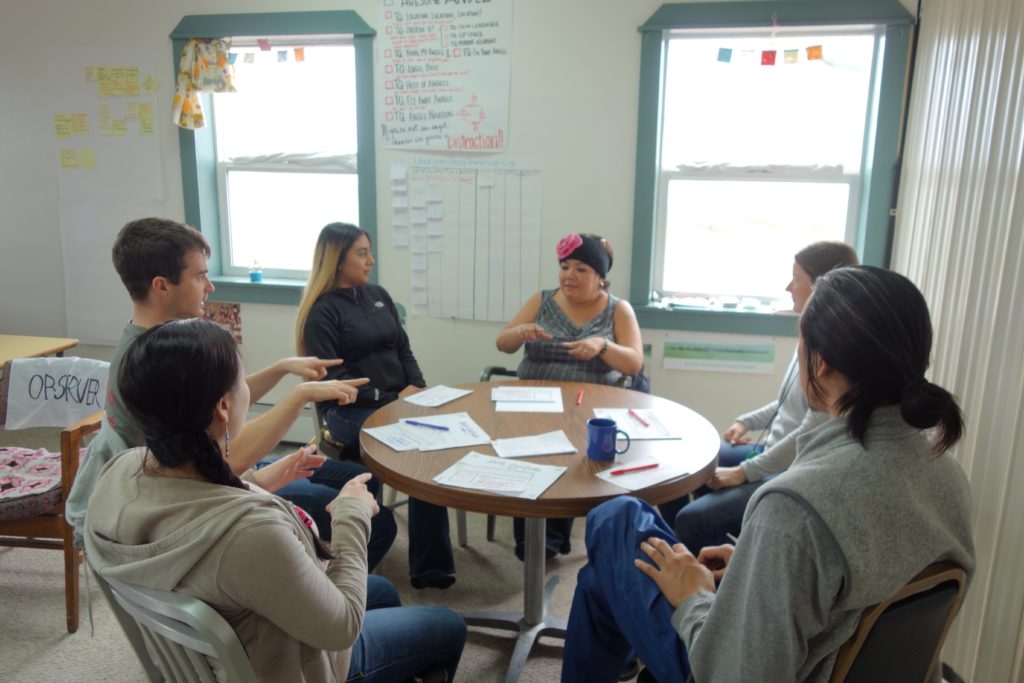 I first met Evan and Susanna at a handful of WAYK workshops, which were each about two to five days long: three workshops at the Alaska Native Heritage Center in Anchorage and one at the Songhees Wellness Center in Victoria, BC. Because of my attendance at these workshops, I was lucky enough to find out about and be able to attend the WAYK Summer Language Intensive in St. Paul in 2017.

I learned a lot during the intensive about the differences between workshops, in which the time is short and the introduction to WAYK is brief, and summer intensives, which are three months long and the WAYK learning is intensive and comprehensive. In this blog, I would like to explore some of the differences in my experiences in WAYK workshops versus the SLI.

In multiple-day workshops, the goal is usually to get a handle on WAYK techniques primarily for the ability to teach in a classroom and build curriculum around that experience. Here on St. Paul, there is a much larger emphasis on “language hunting”, which are the skills developed around how to learn language directly from a fluent speaker, without putting much pressure on that fluent speaker to have to design lessons or be in the position of always being the teacher. The goal is to facilitate conversations between speakers and learners without going into English and without “Sorry Charlie-ing” the learners. I enjoyed this aspect of WAYK; although designing lessons is useful too, I think the core of the WAYK method is in language hunting from fluent speakers.

One of the great things about the SLI is that we are able to witness where a language program can go after 4-5 years. Oftentimes during short workshops, you only see a couple of applications for activities that one can do in a classroom and is difficult to see what the end result is. In an SLI, we are able to look into the future of our own potential language programs with the St. Paul SLI as a model.

One aspect of WAYK that you do not see in the workshops are some of the multiple process tools that are employed, such as the calendar wall (for short and long-term planning), swim lanes (for organizing language hunts and lessons), and a fluency freeway (for bringing learners through an established series of lessons to build personal fluency). These tools, as well as several others, are on full display during the SLI. Though I was introduced to the fluency freeway at several workshops, it was difficult to really see its use during just a few-day workshop, and it is neat to see it put to its full potential.

It has been clear during this internship how little the surface is scratched during WAYK workshops, as WAYK is a very in-depth method with many tools for developing a language program that are difficult to express in a 3-4 day workshop. I am glad for the ability to have been in St. Paul to see WAYK in a larger, long-term context.

Keep Calm and Calendar On